Just over 40 years have passed since the inaugural meeting of the International Geoid Commission of the IAG. It occurred in July, 1990 at the IAG meeting in Milano ; we met at the University of Milano  hosted by Professor Fernando Sanso.

Present at this meeting were (see photo) Georges Balmino, Fernando Sanso, Bill Kearsley, Petr Vanicek, Richard Rapp, Christian Tscherning and Wolfgang Torge. At this meeting Dick Rapp was elected President of the Commission, with Chris Tscherning and myself as co-secretaries.

I want to say that, in all of my years in service on numerous committees, and in public life, I have never met a more congenial and collaborative group. It was, for me, a great honour, a privilege and pleasure to have been involved in the genesis of this important service. 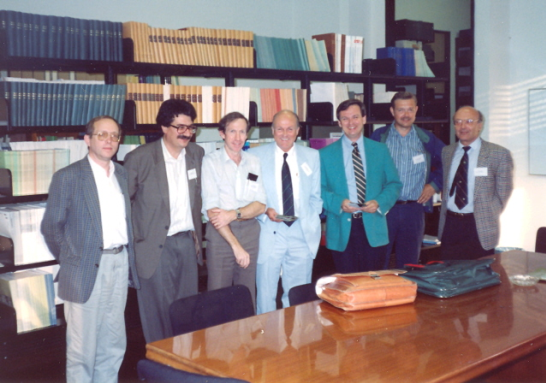 Considering that all in-person activities of this year were cancelled due to COVID-19 pandemic, SIRGAS is promoting Webinars since May with subjects related to geodetic activities in the region, keeping Americas connected.

The records and presentations from all Webinars are available at SIRGAS homepage (www.sirgas.org). For October SIRGAS organized a series of Webinars in the place of annual SIRGAS Symposium, every friday at 15 UTC. Each Webinar has 3 presentations with topics related to:

More information about presentations can be found in the Agenda of SIRGAS Symposium 2020 and links for virtual participation will be available soon on SIRGAS Webpage.

3rd Session: Practical applications oriented to the adoption of SIRGAS at a sub-regional and national level (October 16)

Be connected with SIRGAS every Friday of October at 15 UTC!

Joe Zund was the foremost expositor and developer of the Marussi-Hotine approach to theoretical geodesy. This note is a belated tribute to his enormous contributions in this field. Joe was trained as a mathematical physicist, receiving his doctorate in1964 from the U. of Texas. He held several academic positions, before settling in 1970 for the rest of his career at New Mexico State University in Las Cruces, New Mexico, USA. Before becoming involved in geodesy, he possessed an extensive publication record dealing with topics in differential geometry, electromagnetic theory, and general relativity. He was proficient in several languages.

In 1981 Joe encountered Hotine’s Mathematical Geodesy (published in 1969), and was immediately attracted by its creativity and richness of concepts. This happy interaction yielded a series of publications advancing many of Hotine’s ideas and settling some long-standing problems posed by Hotine. His publications, mainly appearing in Boll. di Geod. e Sc. Aff. and Tensor over the period of 1987 to 1996, introduced many improvements and extensions, but his most outstanding achievements were his two books, both published by Springer-Verlag: (1) A compilation, editing and evaluation of Hotine’s unpublished papers (1991), and (2) his magnum opus “Foundations of Differential Geodesy” (1994). The latter in my opinion was the most significant accomplishment in theoretical geodesy since Hotine’s work. It still serves as both textbook and research treatise.

After Joe turned his attention to geodesy, he became an active participant in the activities of the American Geophysical Union (AGU) and the International Association of Geodesy (IAG). He prepared the Geodetic theory portion of the 1991 Quadrennial U. S. National Report to the International Union of Geodesy and Geophysics. At the General Assembly in Vienna he was appointed Chairman of the IAG Geodesy Subcommission on Differential Geometry. He also served as a member of many other IAG special study groups and commissions. In October 1989 he was the only American invited to a special convocation of the Accademia di Lincei of Rome in memory of Antonio Marussi, and he was given the honor of making the initial presentation covering the significance of the work of Marussi. He was a Life Member of AGU.

Joe told me that he deeply regretted coming into the field of geodesy too late to personally know Marussi and Hotine. In turn, I am certain that they would have appreciated knowing him.

We received the deeply sad news that Günter Stangl - former Director of GGOS Coordinating Office from 2016 to 2017 - passed away, unexpected, much too early in the first years of his retirement in the age of 68 years.

Günter Stangl started his career in Satellite Geodesy in the late 70’s working with Peter Pesec in Doppler campaigns, particularly in the projects promoted by prof. Marussi, prof. Moritz, prof. Seeger and other leading Geodesists of the time aiming at replacing old triangulations across the Alps with satellite surveys, based on the Transit constellation, the precursor of GPS. With Peter Pesec he was involved in the activities of the Graz Observatory for satellite geodesy, where the Laser Ranging activities to satellites were complemented with Doppler and GPS/GNSS. In the early sixties Graz was one of the centers involved in the optical tracking of the very first artificial satellites, using optical cameras and processing techniques inherited from the tracking of minor planets and comets. He was an enthusiast about archeology, and used to spend his vacations by supporting from the topographic view point archeological excavations.

Most of his career he worked for the “Austrian Federal Office of Metrology and Surveying” (BEV - Bundesamt fuer Eich- und Vermessungswesen) at the “Observatory Lustbuehl Graz” (OLG) of the “Austrian Academy of Science” and the TU in Graz at the “Institut fuer Weltraumforschung (IfW). It was normal to find at the IfW young visiting scientists from several countries working with Günter on the processing of GPS campaigns.

He was involved in the EUREF (Reference Frame Sub Commission of Europe) activities since the late 1990ies. With Günter Stangl, OLG and later BEV hosted one of the “Regional Data Centres” for the EUREF Permanent Network (EPN), the “Local Analysis Centre” named OLG and a “Densification Analysis Center”. In 2001 he joined the EUREF TWG, now Governing Board (GB). In 2008, he took over the responsibility as EPN Data Flow Coordinator. Also in 2008, he took over the responsibility for the validation and the database for the EUREF GNSS Campaigns, where he collected the data, results and reports. Günter had a wide knowledge in Geodesy in general and he was well connected within the European GNSS community, especially in the South East and Central part of Europe.

In 2016 the GGOS Coordinating Office (CO) was transferred from BKG in Germany to the BEV in Austria and Günter took over the position as the director of the GGOS CO until his retirement in 2017. We appreciate his great effort and contribution to GGOS activities including success of smooth transition of GGOS CO.

We will miss him and convey our sincere condolences to his family, friends, and co-workers.

In the name of the GGOS Coordinating Board,
BASARA MIYAHARA (GGOS President) and MARTIN SEHNAL (GGOS CO Director)
source: http://ggos.org/en/memoriam-guenter-stangl/