The IAG Newsletter is under the editorial responsibility of the Communication and Outreach Branch (COB) of the IAG.

It is an open forum and contributors are welcome to send material (preferably in electronic form) to the IAG COB (newsletter@iag-aig.org). These contributions should complement information sent by IAG officials or by IAG symposia organizers (reports and announcements). The IAG Newsletter is published monthly. It is available in different formats from the IAG new internet site: http://www.iag-aig.org

The International Union of Geodesy and Geophysics (IUGG) holds its 27th General Assembly from July 8 to 18, 2019 in Montreal, Canada. The general assembly theme is the celebration of the centennial of the IUGG establishment in Brussels, Belgium, in 1919.

Hydrological Sciences, IAHS; Meteorology and Atmospheric Sciences, IAMAS; Physical Sciences of the Ocean, IAPSO; Seismology and Physics of the Earth's Interior, IASPEI; and Volcanology and Chemistry of the Earth's Interior, IAVCEI) arrange their General Assemblies in parallel with the IUGG. This enables to hold joint inter-association symposia besides the specific association symposia and a greater involvement in the IUGG symposia.

There will be nine Union Symposia organized by IUGG and each of the associations in cooperation with the IUGG Commissions (Climatic and Environmental Changes, CCEC; Mathematical Geophysics, CMG; Geophysical Risk and Sustainability, GRC; Study of the Earth's Deep Interior, SEDI; Data and Information, UCDI; Planetary Sciences, UCPS), the IUGG Working Group on History (WGH), and the Global Geodetic Observing System (GGOS).

In addition, there will be nine Union Lectures given in three special sessions by representatives of the IUGG and associations:

The joint symposia are always led by an association with co-conveners from other associations. IAG has the lead of the following Inter-Association Symposia:

and IAG is sponsoring (with IAG co-conveners) the following Inter-Association Symposia led by other associations:

The IAG specific symposia are the main issue of the IAG General Assembly:

For all details of the symposia descriptions and the program, please visit the IUGG2019 Homepage (http://iugg2019montreal.com/). The most important deadlines are:

IAG invites all geodesists to participate in the General Assembly 2019 and to present their work in one of the symposia. We look forward to seeing you in Montreal!

University of São Paulo, Polythecnic School, Department of Engineering Transportation (EPUSP-PTR) supported by Institute of Geography and Cartography (IGC) of São Paulo and Centro de Estudos de Geodesia (CENEGEO) and the University of Costa Rica, Faculty of Surveying Engineering and Instituto Geográfico Nacional (IGN), Costa Rica, cooperated for the establishment of the Absolute Gravity Network in the country. A total of 18 stations have been observed. The measurements have been undertaken with A-10 Micro-g LaCoste absolute gravitymeter, number 032. The stations are identified by the name of the city as follow: San José (UCR), Pavas (TOBI), San José (EITL), Heredia (GTCG), Cerro Buenavista (CDMT), Buenos Aires (BURE), Golfito (UCRG), Quepos (QUEP), Esparza (ESPA), Nicoya (UNAN), Liberia (LIBE), Santa Rosa (PNSR), Tilarán (TILA), Los Chiles (CHIL), Turialba (UCRT), Limon (UCRL), Sarapiqui (SARA), Gandoca (RGMO). The figure shows the distribution of the stations in the country. The final results are under analysis and they will be published very soon. But, it is already known that the Standard Deviation (S.D.) of the network, in most of the stations, are between 10 to 12 µGal. This network will be a contribution for the International Global Absolute Reference Frame (IAGRF). The following people participated to the efforts for the measurements: Denizar Blitzkow and Ana Cristina O. Cancoro de Matos from CENEGEO; Iuri Bjorkstrom and Valéria Cristina Silva, from University of São Paulo; Oscar H. Lucke, Juan Antonio Picado Salvatierra, Jaime Garbanzo Leon, Alonso Vega Fernandez from University of Costa Rica, Álvaro Álvarez Calderón from the National Geographical Institute of Costa Rica. 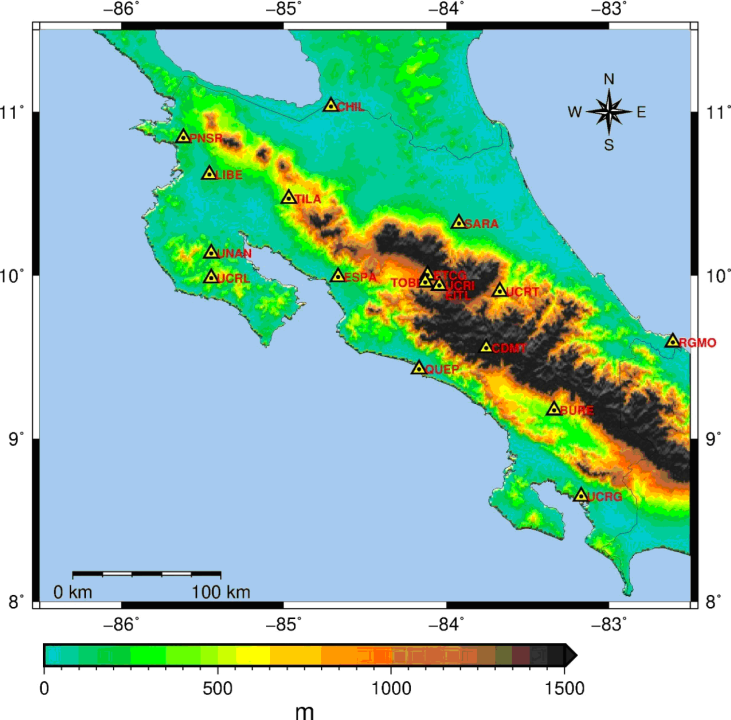 In the past two important efforts have been experienced in Costa Rica. In the first case, IGSN71 efforts set up two gravity reference stations. One of the sites was located in the Central Park of the capital city of San José. The other site was placed in the coastal city of Puntarenas. This last one is important since it is near the site of the tide gauge used to establish the mean sea level, which was a height reference for the original geodetic network of Costa Rica.

After IGSN71, the geophysics commission of the Pan-American Institute for Geography and History formed a group called the Latin-American Gravity Informative System (known as SILAG for its initials in Spanish) with support of the Inter-American Geodetic Survey (IAGS), at that time. This group, with support of the individual geographical institutes of the nations involved, implemented a project called Latin-American Network for the Normalization of Gravity 1977 (known as RELANG77 for its initials in Spanish). This project created a network of gravity reference stations through relative gravity observations based on the IGSN71 values. For Costa Rica, RELANG created eight gravity reference stations.

Moreover, Costa Rica is located within a highly dynamic region regarding tectonics and volcanism. This means that the gravity value might change over time due to vertical deformation of the surface caused by crustal faults and subduction processes and due to changes in the internal mass distribution caused by magmatic processes. So, the present absolute network will be very important for gravity changes monitoring, between other applications. 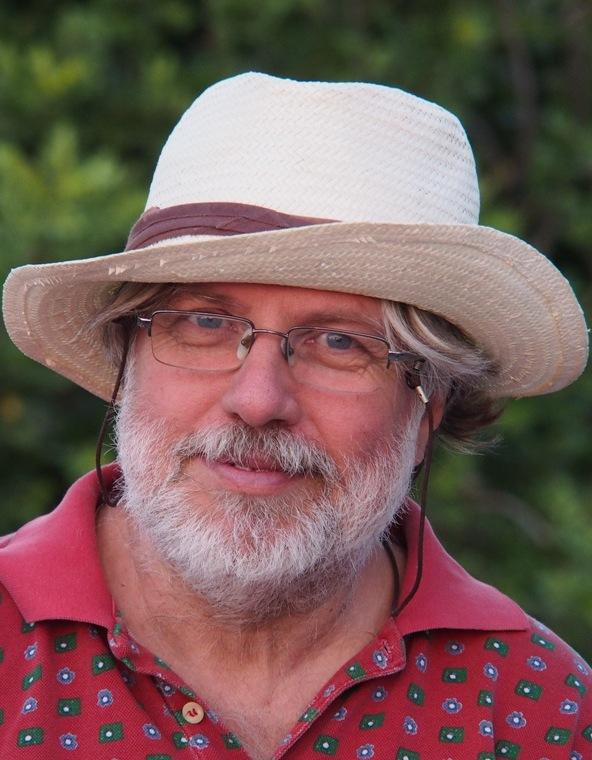 A Honorary volume for Professor Emeritus Athanasios Dermanis has been published by the School of Rural and Surveying Engineering of the Aristotle Universsity of Thessaloniki:

E. Grafarend: The Global World of A. Dermanis and an attempt to use System Dynamics for the analysis of Polar Motion (POM) and Length of Day Variations (LOD).

A. Fotiou: A Discussion on Least Squares Adjustment with Worked Examples.

B. Benciolini, D. Sguerso, A. Vitti, P. Zatelli: New Procedures for the Adjustment of Photogrammetric Blocks.

L.E. Sjöberg: The Temporal Change of the Geoid Determined from GRACE monthly sets of data.

D. Ampatzidis: Is really the “Local Datum” an Obsolete and Old-Fashioned Definition? The catalytic role of the velocity field for the modern geodetic reference frames: The Minimum Kinetic Energy Criterion.

M.E. Contadakis, D. Arabelos: Mid Latitude TEC Variations before and during the Balkan Peninsula Seismic Activity of 24th May 2009.

A.E. Foscolos: The Messinian Salinity Crisis during the Upper Miocene as a Cause for Generating Giant and Super-Giant Biogenic Gas Fields in the Eastern Mediterranean Basin.

I. Fotiou: An Introduction to Tropical Convexity.

for your information, issue 63(1) of Advances in Space Research (COSPAR official journal), published on January 1, 2019, is available online and will remain free-of-charge without any paid subscription to this journal for a complete year, courtesy of Elsevier, providing promotional OpenAccess.

All articles can be accessed at:

While it is a very large issue (59 papers and 812 pages), the selected article below could be of interest to the Laser community:

The Space Environment Research Centre (SERC) and the ILRS hosted the 21st International Workshop on Laser Ranging at the John Curtin School of Medical Research, Australian National University in Canberra, Australia during the week of November 05-08, 2018. SERC was established to combine government, university, and industry resources to apply new optical technology toward the problem of space debris, including information and direct intervention. Their research supports improvements in debris orbit predictions that allow active satellites to maneuver in time to avoid space debris collision. As such, SERC is, in general, very interested in laser ranging.

The theme of the workshop “Laser Ranging for Sustainable Millimeter Geoscience” afforded presentations on a wide range of topics highlighting SLR contributions to research. The workshop consisted of nine oral sessions with posters for each session. The session topics were:

In addition to the main oral sessions, the workshop dedicated significant program time to poster sessions. Poster submissions were requested for each session theme. Furthermore, posters which provided updates on station activities were strongly encouraged. The workshop once again included a station operations or “clinic” session where ILRS experts met in small groups of station engineers and operators to provide solutions to common station problems, information to maintain station stability, and guidelines for interacting with the analysts in determining station biases. These station clinics were well received and attended by workshop participants.

Over 175 registrants from 23 countries participated in the four-day laser ranging workshop. It was followed by a one-day International Workshop on Space Debris Management on November 09; 20 additional attendees, mainly from Australia, participated. 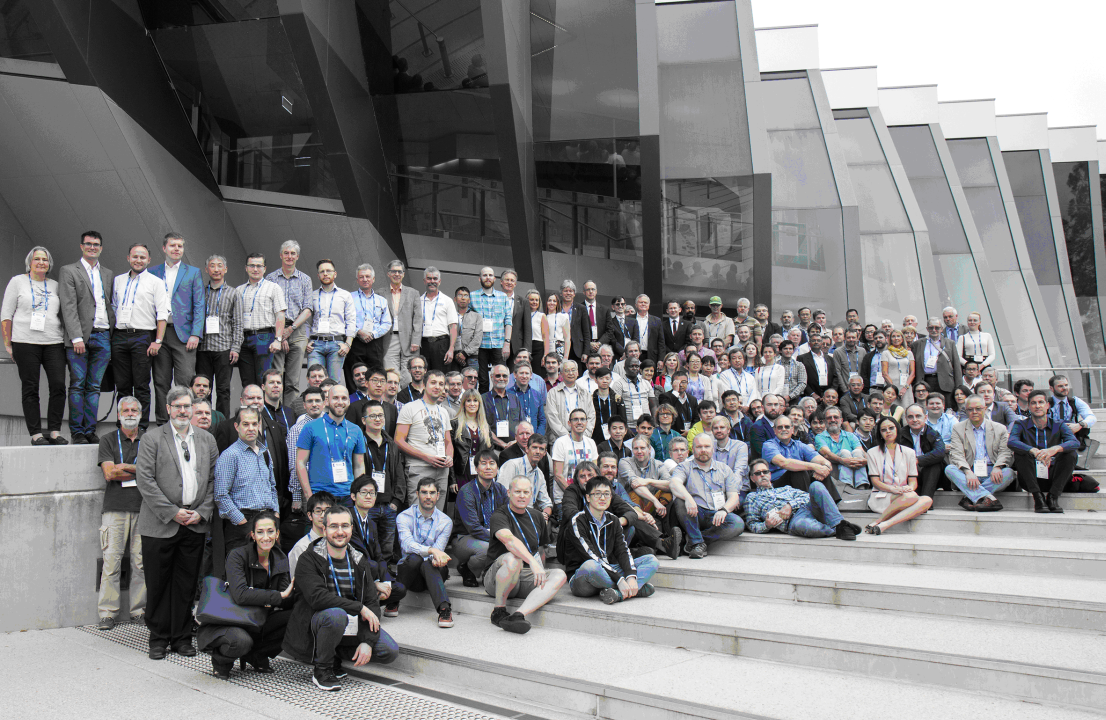 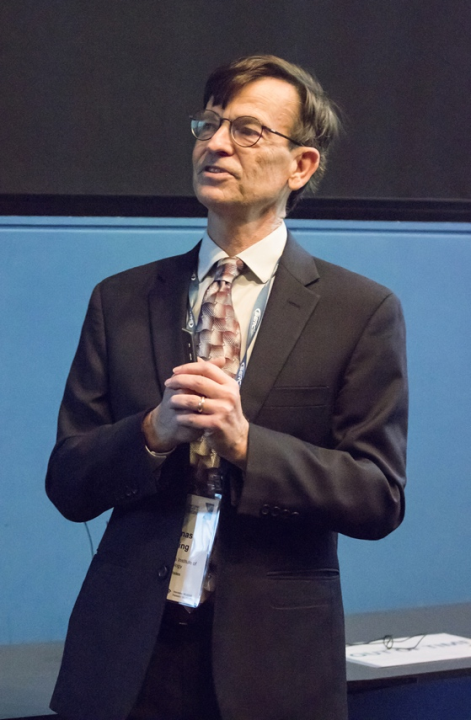 Professor Thomas Herring, Massachusetts Institute of Technology, Cambridge, MA gave the invited keynote talk to open the workshop. Professor Herring’s presentation highlighted the important synergy of SLR with the other space geodesy techniques, and ways of drawing out small systematic issues through careful scrutiny of the SLR data.

The four-day workshop program was organized into nine oral sessions, and two poster sessions focused on the oral session topics. A brief summary of these sessions:

Workshop organizers allocated one afternoon during the week to station “clinics”, allowing station operations staff (and anyone else with interest in the topics covered) to meet in small groups with experts in the engineering and data analysis areas. The clinics primarily benefited station representatives although others attendees were encouraged to participate. The topics covered in the clinic sessions were:

These sessions were intended to be two-way conversations between topic experts and station contacts; material was prepared and distributed prior to the workshop to allow these representatives to gather any questions prior to the workshop. Six small group clinics provided solutions to common station problems, information on maintaining station configuration stability, overview of new tools available, and guidelines for interacting with the analysts in determining station biases.

One issue that stimulated discussion was the SLR policy in tracking GNSS satellites. The ILRS routinely prioritizes satellite targets by altitude (LEO through geosynchronous), with occasional adjustments to enhance tracking on new satellites, typically with active systems aboard. Within the GNSS regime, several satellites may be given high priority at the request of the constellations to provide better pass coverage (3 pass segments) for special directed applications. Of the remaining GNSS satellites (currently ~ 60), a subset is identified for non-prioritized tracking on “as time permits” basis. The ILRS will work with the IGS and the contacts from the GNSS constellations for their inputs.

The 21st International Workshop on Laser Ranging concluded with a general discussion on the format of the workshop, planning for future workshops, and improvements to the clinic content and organization. In addition, the attendees put forth several resolutions: 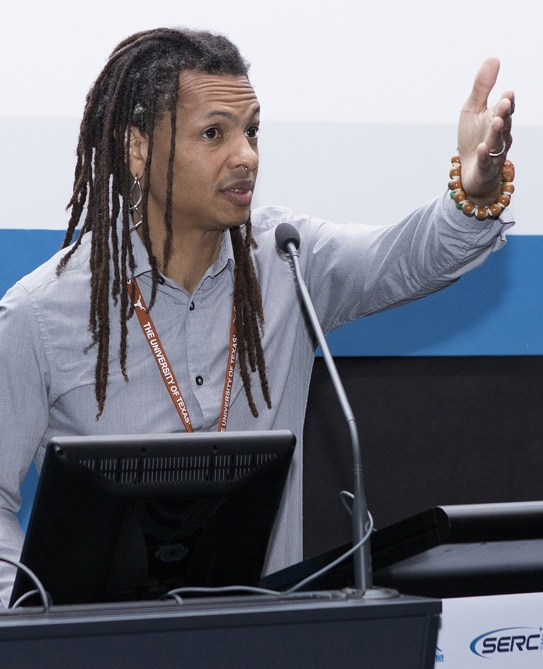 The last day of the week was devoted to a separate event, the International Workshop on Space Debris Management, which has synergy with new ILRS applications. Associate Professor Moriba Jah, University of Texas at Austin gave the opening keynote presentation to the International Workshop on Space Debris Management. This interesting talk covered the global importance of developing a capability to predict, quantify, and assess the behavior of objects in space and ideas for identification, location prediction/modeling, and quantification of space objects. 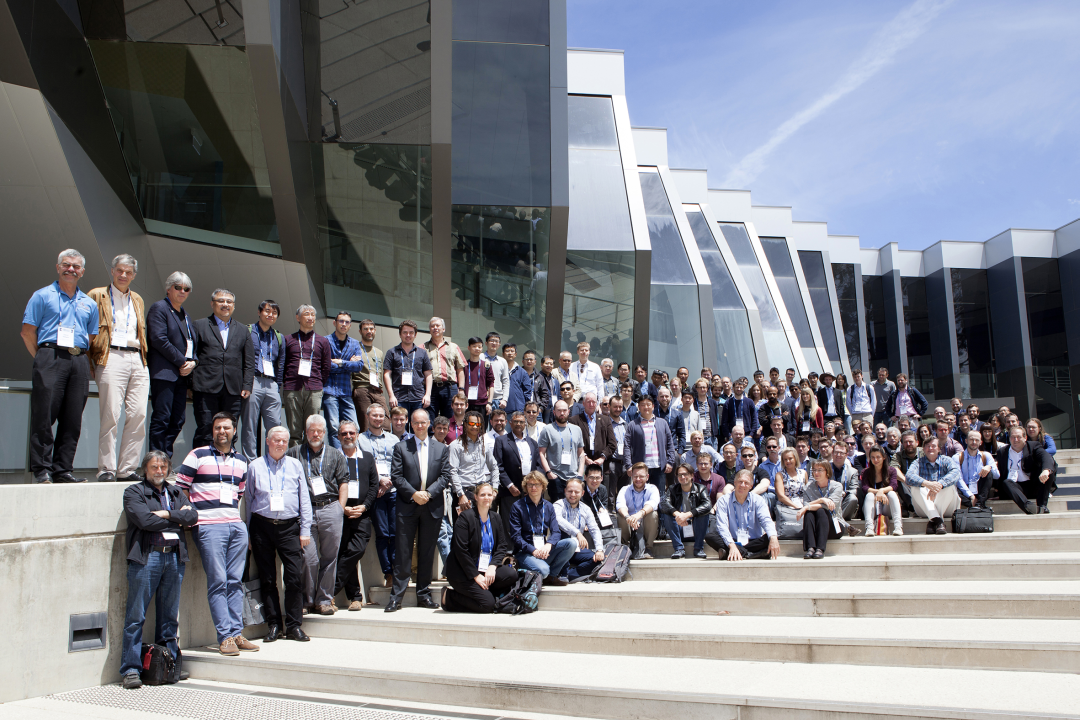 The workshop’s local organizing committee not only assisted in the preparation of an excellent program, but handled all logistics at the venue and arranged several excellent social events. The Wednesday workshop banquet took place at the National Arboretum, surrounded by forests of rare and endangered trees from not only Australia but around the world; attendees explored the grounds and were treated to a beautiful landscape complete with double rainbow. On the final day of the week, participants were given a tour of the EOS Space Research Centre (including the telescope facility) at Mt. Stromlo, which consists of operational and lab facilities for SLR and space debris tracking. The site also includes a state-of-the-art ground survey monitoring system with some locally built survey/ground baseline monitoring hardware. The local hosts concluded the tour with a barbeque dinner on the grounds of Mt. Stromlo with local kangaroos in attendance. 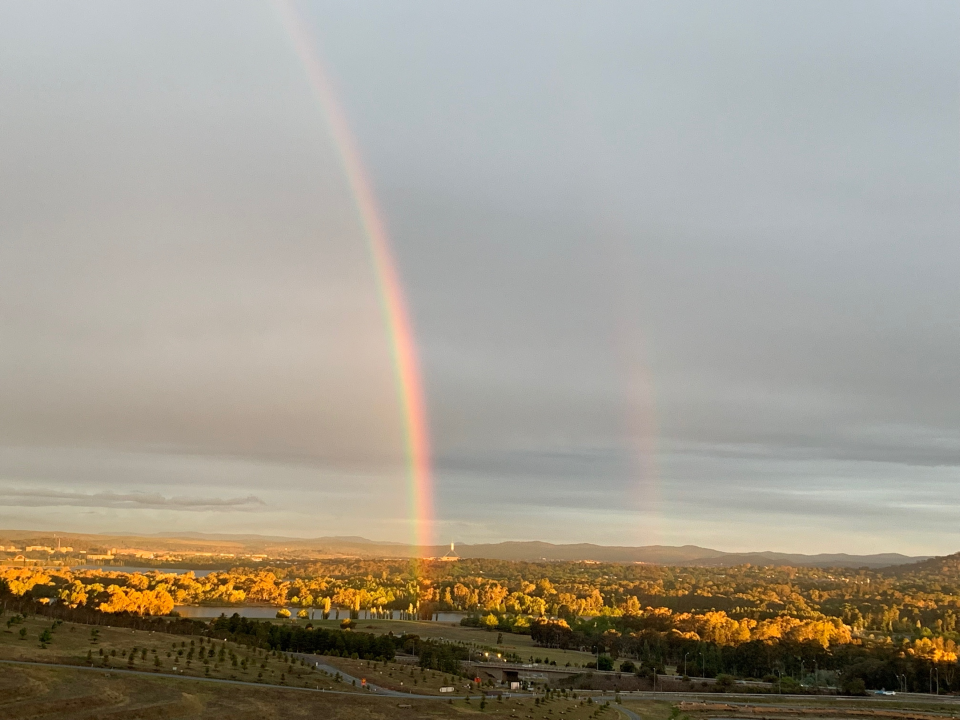 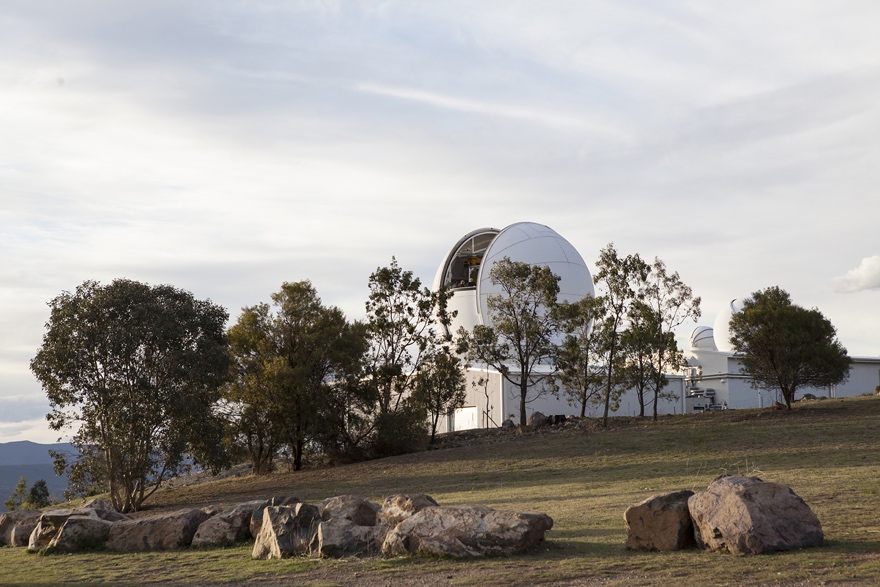