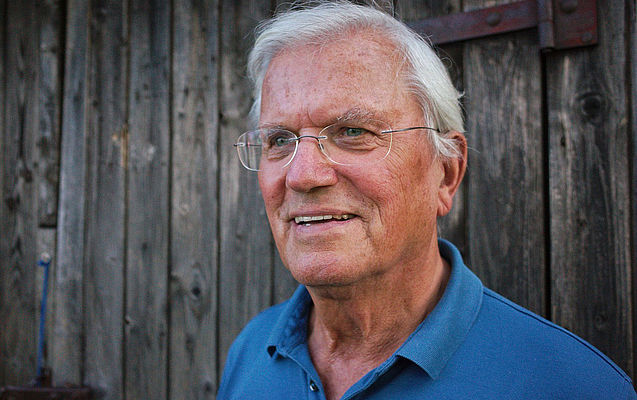 The International Geodesy Association (IAG) awarded the Levallois Medal of the Year 2019 to Professor Christoph Reigber at the 27th IUGG (International Union of Geodesy and Geophysics) General Assembly in Montreal. With this prestigious award, named after the French IAG Secretary General of 1960-75, Jean-Jacques Levallois, the IAG honours every four years outstanding achievements of a scientist in the field of IAG and geodesy in general.

Christoph Reigber, former Director of the German Geodetic Research Institute DGFI in Munich and former Director of the Department "Geodesy and Remote Sensing" at the GFZ German Research Centre for Geosciences in Potsdam as well as Professor Emeritus of the University of Potsdam, played a major role in the development, use and international coordination of satellite techniques for geodesy and geodynamics during his active service in Munich and Potsdam. For many years he was President of the IAG/COSPAR (Committee for Space Research) Commission for the International Coordination of Space Technologies for Geodesy and Geodynamics (CSTG), President of the IAG Advanced Space Technology Section, as well as Chairman of the Executive Committees of the International Earth Rotation and Reference Systems Service (IERS) and the International Global Navigation Satellite Systems Service (IGS) of the IAG.

Since the 1970s, Christoph Reigber and his working groups, and in cooperation with international space organizations and the space industry, have been particularly active in the detailed determination of the Earth's gravitational field. With his later initiatives for the realization of the satellite-to-satellite tracking missions CHAMP and GRACE, he has contributed significantly to the development of two new fields of application for satellite geodesy, which are particularly important for climate research: the recording of large-scale mass movements in the geosphere by measuring temporal changes in the gravitational field, and the determination of state variables of the lower atmosphere by evaluating GNSS radio occultation measurements.

On the occasion of the 80th birthday of Prof. Dr.-Ing. Dr.-Ing. E.h. Christoph Reigber, the Helmholtz Centre Potsdam - GFZ German Research Centre for Geosciences organized an honorary colloquium for its former department director on October 1, 2019.

Christoph Reigber celebrated his 80th birthday on July 8 of this year already. Now, after the summer holidays, the GFZ invited to this Honorary Colloquium and guests from all over Germany and overseas followed the invitation to Potsdam's Telegrafenberg. After being welcomed by Reinhard Hüttl, Scientific Director of the GFZ, Harald Schuh, Director of Department 1 “Geodesy” of the GFZ and Honorary President of IAG, first presented the jubilee with the highest award of the IAG, the Levallois Medal, for his outstanding services to the IAG and geodesy. Former IAG president Chris Rizos congratulated on the well-deserved award in a cordial video message.

The following colloquium contributions were without exception presented by meritorious, long-standing companions of the honored. The lectures captivated both the geodesists and the non-geodesists in the audience with historical backgrounds, scientific explanations and anecdotal sprinkles. Harald Schuh moderated the afternoon in a wonderfully entertaining way. Reiner Rummel from the Institute for Astronomical and Physical Geodesy, TU Munich, gave an overview of "Christoph Reigber and Satellite Geodesy" in his laudation. Hermann Drewes from the German Geodetic Research Institute DGFI, TU Munich, reported on "Networks, Geopotential, Earth Rotation and Geodynamics: The Reigber Era at DGFI in Munich". Rolf Emmermann, founding director of GFZ, described Reigber's role in establishing GFZ. Gerhard Beutler from the Astronomical Institute of the University of Bern and former President of the IAG, in his lecture on "Planet Earth and the Scientific Services of the IAG", referred to Reigber's role in setting up these services, in particular the IGS and the IERS, each of which he headed for several years. Jörn Lauterjung,  Director of IT Services at the GFZ and current successor of Christoph Reigber as Co-Director of the Central Asian Institute for Applied Geosciences (CAIAG) in Bishkek, Kyrgyzstan, reported on creation and development of CAIAG. Georges Balmino from the Groupe de Recherches de Geodesie Spatiale (GRGS) of the French space agency CNES in Toulouse gave an exciting overview of the first 30 years of Franco-German cooperation in gravity field modelling up to the turn of the millennium against the background of the lifelong friendship between himself and the jubilee. Ludwig Grunwaldt of GFZ Section 1.2 "Global Geomonitoring and Gravity Field" took the audience on an adventurous journey through time in his lecture on the satellite mission CHAMP: apart from the groundbreaking scientific results for the exploration of the gravity and magnetic fields and the atmosphere, the truly radical aspects of the mission were revealed. Finally, Frank Flechtner, head of GFZ Section 1.2 and Co-PI of the GRACE and GRACE FO missions, presented the contributions of these two satellite missions to the observation of global climate change.

An enchanting musical accompaniment of the colloquium was bestowed by four saxophonists, the ensemble “Saxophonquadrat”. Coffee break and evening reception offered far too short an opportunity to talk to colleagues, former co-workers, friends or project partners who sometimes had not met for decades. Altogether, and many attendees confirmed this, it was a most memorable and enjoyable event. We wish Chris Reigber and his wife in the circle of children and grandchildren many more fulfilled years in the best of health!