4th Symposium of the Committee on Space Research (COSPAR)

The IAG Newsletter is under the editorial responsibility of the Communication and Outreach Branch (COB) of the IAG.

It is an open forum and contributors are welcome to send material (preferably in electronic form) to the IAG COB (newsletter@iag-aig.org). These contributions should complement information sent by IAG officials or by IAG symposia organizers (reports and announcements). The IAG Newsletter is published monthly. It is available in different formats from the IAG new internet site: http://www.iag-aig.org

The International Union of Geodesy and Geophysics (IUGG) holds its 27th General Assembly from July 8 to 18, 2019 in Montreal, Canada. The general assembly theme is the celebration of the centennial of the IUGG establishment in Brussels, Belgium, in 1919.

Hydrological Sciences, IAHS; Meteorology and Atmospheric Sciences, IAMAS; Physical Sciences of the Ocean, IAPSO; Seismology and Physics of the Earth's Interior, IASPEI; and Volcanology and Chemistry of the Earth's Interior, IAVCEI) arrange their General Assemblies in parallel with the IUGG. This enables to hold joint inter-association symposia besides the specific association symposia and a greater involvement in the IUGG symposia.

There will be nine Union Symposia organized by IUGG and each of the associations in cooperation with the IUGG Commissions (Climatic and Environmental Changes, CCEC; Mathematical Geophysics, CMG; Geophysical Risk and Sustainability, GRC; Study of the Earth's Deep Interior, SEDI; Data and Information, UCDI; Planetary Sciences, UCPS), the IUGG Working Group on History (WGH), and the Global Geodetic Observing System (GGOS).

In addition, there will be nine Union Lectures given in three special sessions by representatives of the IUGG and associations:

The joint symposia are always led by an association with co-conveners from other associations. IAG has the lead of the following Inter-Association Symposia:

and IAG is sponsoring (with IAG co-conveners) the following Inter-Association Symposia led by other associations:

The IAG specific symposia are the main issue of the IAG General Assembly:

For all details of the symposia descriptions and the program, please visit the IUGG2019 Homepage (http://iugg2019montreal.com/). The most important deadlines are:

IAG invites all geodesists to participate in the General Assembly 2019 and to present their work in one of the symposia. We look forward to seeing you in Montreal!

The Leibniz Society of Sciences in Berlin e. V. and the Helmholtz Center Potsdam GFZ German Research Center for Geosciences held a scientific colloquium on the site of the former Royal Observatories on Telegrafenberg hill in Potsdam on 15 February 2019 entitled "One and a half century of international cooperation of geodesists and geophysicists" to honor the founding of the IUGG 100 years ago. The colloquium was also supported by the DVW (German Association of Surveyors) and the Technical University of Berlin. 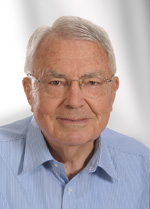 The International Association of Geodesy was represented by its current President Harald Schuh. He has been Director of the Geodesy Department at the GFZ since 2012 and member of the Leibniz Society since 2014. The colloquium was also an academic ceremony in honor of Helmut Moritz on the occasion of his 85th anniversary, who was President of the IAG from 1975 to 1979, its honorary President thereafter, and President of the IUGG from 1991 to 1995. Helmut Moritz has been a member of the Leibniz Society of Scientists since 1984. Renowned scientists from the research hubs of scientific geodesy Potsdam, Munich, Stuttgart and Hanover, Graz, Prague, Helsinki, and Moscow gave talks. With great joy and gratitude the colleagues from Austria, Finland, Czech Republic, and Russia were welcomed. They stand for their compatriots, who significantly promoted the reentry of German geodesists and geophysicists into the international community during the Cold War. Heidrun Kopp from the Helmholtz Centre GEOMAR, designated President of the German Geophysical Society (DGG), spoke about interlinkages of geodesy and geophysics, as well as the contributions of the DGG.

One of the organizers of the colloquium, the Leibniz Society, is today's legal-organizational successor of the Leibniz Society of Scholars which was founded in 1700 in Berlin by the Brandenburg Elector Frederick III. and endowed from 1701 onwards by King Frederick I of Prussia. Its informal member group Geodesy currently comprises Heinz Kautzleben (since 1979), Helmut Moritz (since 1984), Erik W. Grafarend (since 2004), Reiner Rummel (since 2007), Petr Holota (since 2013), Harald Schuh (since 2014), Hans Sünkel (since 2014), Jürgen Müller and Roland Pail (both since 2019).

The other organizer, the GFZ German Research Center for Geosciences, was founded in 1992 after German reunification. At its founding, the GFZ took over the care and continuation of the great traditions of the Potsdam-Telegrafenberg science location.

The program of the event can be viewed on the website of the Leibniz Society www.leibnizsozietaet.de.

The laudation for Helmut Moritz by Hans Sünkel (in German) can be downloaded here:
https://leibnizsozietaet.de/wp-content/uploads/2019/02/Beitrag-H.-S%C3%BCnkel.pdf

member of the Leibniz Society, Fellow of IAG

The 19th General Assembly of the World Earthquake GEodesy Network for Environmental Hazard Research (WEGENER), on earth deformation and the study of earthquakes using geodesy and geodynamics, was held at the Site Bergès - CRAYA Amphitheatre in Grenoble University in Grenoble, France, from 10-13 September 2018.

Photo 1: The participants of the general assembly outside the conference venue in Grenoble.

WEGENER has primarily focused on the application of space geodetic and other disciplines to the study of geodynamics since it was established in the beginning of the 1980s. With the increasing number of researchers and areas involved in WEGENER, general assemblies of WEGENER have been organized biannually starting with 10 th General Assembly in 2000. Since 2012, it has become sub-commission 3.5 of International Association of Geodesy (IAG) commission 3, entitled as Tectonics and Earthquake Geodesy.

The 19th general assembly consisted of seven thematic sessions related to the “Tectonics and Earthquake Geodesy” that covered joint application of geodetic and other geoscientific methods to investigate geodynamics of the Earth. The sessions arranged by an international scientific committee with 26 scientists (details on https://wegener2018.sciencesconf.org/ ) are as follows;

In the frame of this assembly, the local organizing committee led by Dr. Anne Socquet gathered 170 scientists from 27 countries across all continents for an intense scientific discussion for four days. 7 keynote speeches, 72 oral presentations and more than 100 poster presentations were given during the seven thematic oral and two poster sessions of the meeting. 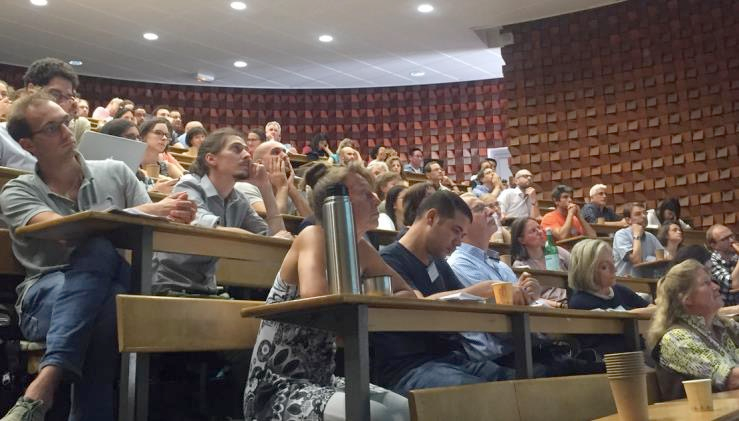 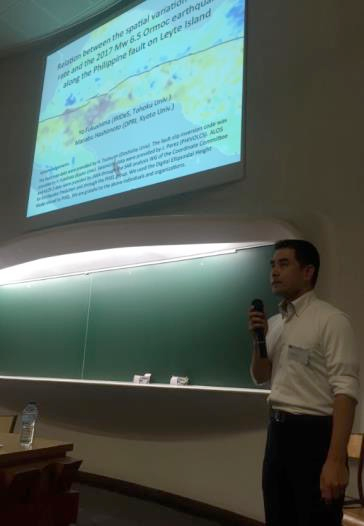 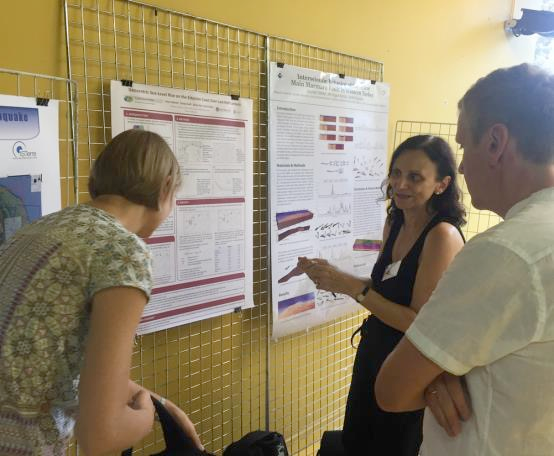 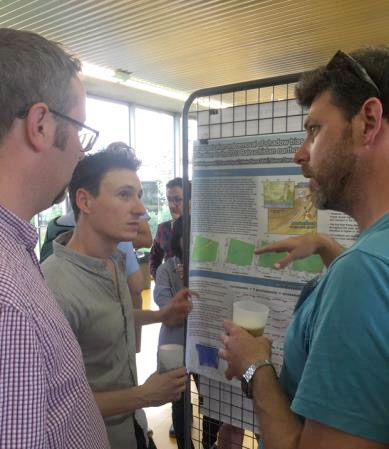 The participants enjoyed a gala diner in restaurant “Le Téléphérique”, that offered delicious meals and a beautiful view on Grenoble and surrounding mountains.

One of the significant contributions of the General Assemblies of Wegener is the field trips where researches can investigate and discuss different tectonic structures in visited areas. During the 19 th General Assembly, the field trip took place in Triève on 13 th September 2018 in order to visit the active landslide of l’Harmalière, which is an instrumented site of Grenoble Observatory (OSUG).

All details of the assembly including detailed information about presentations and more photographs can be found at https://wegener2018.sciencesconf.org/.

In addition to its biannual meetings, WEGENER will conduct a session entitled “G3.4- Monitoring and modelling of geodynamics and crustal deformation: progress during 38 years of the WEGENER initiative” in Geodesy program group (G) of the EGU General Assembly 2019. During the meeting, recent multidisciplinary studies of Earth deformation using geodetic techniques (GPS, InSAR, LiDAR, space/air/terrestrial gravity, ground-based geodetic observations), complementary tectonic and geophysical observations, and modeling approaches focusing on the European-Mediterranean and Northern African regions will be discussed via seven oral and eighteen poster presentations on Wednesday, 10 April. The detailed information about the WEGENER meeting conducted in EGU General Assembly 2019 can be found at    https://meetingorganizer.copernicus.org/EGU2019/session/30377.